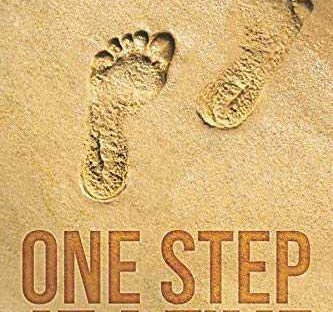 For him, life was replete with tragic incidents one following the other – as if they were rehearsing for the next macabre dance. Even before he could speak up and call out for his mother, life had dealt its first cruel blow. And then, at every stage of his life, whenever he tried to stand up, he was knocked down.

But he refused to surrender.

It took months of pain, years of struggle and decades of determination to regain control of his life, and his body.

And then, tragedy struck once again…

One Step at a Time is an inspiring narrative of Visu – a man who stood all his life for others, though he himself couldn’t stand without support. This is a story of a man who helped many find purpose and meaning in life, though he himself had been wronged by the quirk of fate.

Let’s count Visu’s steps along the way. One Step at a Time.

The cover is too simple and beautiful, but it could have been better, provided the story line of hope and courage.

The Title of the book is apt for the story given the struggle faced by the protagonist Visu in life.

The blurb gives an insight of the story of Visu, his struggles and his courage to fight the odds.

The story is set in pre independence era. The main protagonist Visu loses his mother at an early age of 2. Then His father and his 2 elder brothers took care of him, But life had some other plans for him. Life takes away his support system and life tests him everywhere. But His hope and courage keeps him going.

The inclusion of images and quotes along with chapters made the interest of the reader in the story intact.

What I loved the most about the storyline is the simplicity with which the story progressed. The main protagonist was not glorified. He was an ordinary man throughout the story.

The story revolved around the life of Visu, His character was well crafted. But Other characters could not be developed like his.

The use of simple language and the vocabulary helped me connect with the story better.

I look forward to read more from the Author in future.

Me? Mohit Goyal. I am Peculiar Indian with a good sense of humor. Movies, Music, Mocktails and Motivation are a large part of my life. I Dream to Contribute to the Society. And Hopefully One day I will make it happen on a Large Scale. I do take my life seriously but then I realize..Its of No Use. I believe in the Philosophy of “Few But True Friends”. View all posts by Mohit Goyal